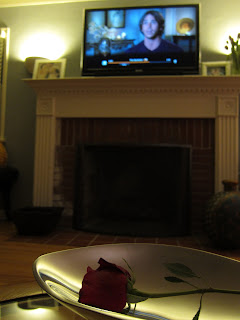 i'm about to share with you two secrets about me that i can't help:  the first is that i love the bachelor.  the second is that it isn't really a secret, because i pretty much tell everybody.  i guess i should just say that having taken my fair share of women's studies classes at chapel hill, i should be ashamed of it - but i can't help myself.  it's not only the bachelor, though. it's the bachelorette and the trashiest show of the series, bachelor pad (i can even admit this one is horrendous, but i still watch).   for those of you sex and the city fans, it is sort of like my secret single behavior.  only, instead of standing in my kitchen reading fashion magazines and eating saltines with grape jelly, twice a year, i indulge in the drama-filled dating show where no one ever stays together.  well, a few do, but let's face it, that's not why i watch.

so what draws me in?  i guess it's the psychology major in me that wants to dissect and analyze dating and relationships, or maybe it's the girl who just hopes for a happy ending. before i met jeff (read stalked jeff), i was out in that world way too long and can relate to a lot of what these women feel.  i mean this is obviously not real-life dating, but i still consider it dating at its finest.  they always go on these exotic trips and now they pretty much get to travel the world.  we honeymooned in tahiti and even stayed at the same resort where roberto proposed to ali (two things:  we absolutely did not know this in advance. i'm not THAT bad and they just broke up - again not shocking)

it's as if the entire dating ecosystem exists in one show.  there's always the crazy girl, the bitchy girl, the insecure girl who later regrets all of those times she cried on camera, the sweet, girl next door (whom is usually girl #2 who rides away in the limo in tears, thinking she was going to get proposed to that day), the girl with the tiny waist and huge boob combo, and the girl who is a little out of his league.  of course, he usually picks the girl that is out of his league and it rarely ever works out.  but, somehow it gets me everytime.  no matter if it is some lame bachelor like brad womack, i still watch.  jeff now partakes in the Monday night activity, but i just have to tune out his ongoing comments on how this guy is a douche bag, or that girl is CRAZY.