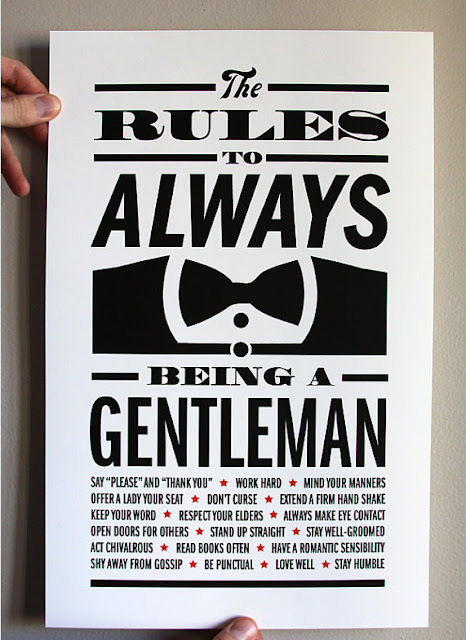 i ran across this print on etsy and ordered it immediately,  partly because i will absolutely hang it in my future son's room (when and if i have a boy), but mostly because i am reminded of it every day, being married to jeff, my old-fashioned gentleman.

i think it is important for me to preface all of this with the fact that i took my fair share of womens' studies classes at unc and would absolutely define myself as independent.  i didn't walk through life waiting for a man to do things for me.  all that being said, i can't tell you how many times i've been in an elevator with a guy and been floored when he cuts right in front of me the minute the door opens.  maybe it's the southern girl in me, but i just find it to be rude.

it makes me so happy when i see jeff being thoughtful and considerate to those around him.  for example, yesterday when my new hairdresser (thanks for the referral, tita) was walking out to her car with her mobile office (aka suitcase) and jeff insisted on carrying it out to her car, she was so taken aback by it.  she must have said "really? you'd do that?"  at least three times.  when she left she said "you are such a gentleman and there aren't that many left." i think she was genuinely shocked by jeff's graciousness, but that's just who he is.  on one of our very first dates, we had both driven separately to a bar and when i got up to pay the valet said jeff had already taken care of it.  that was such a gentleman move.  and if you didn't know this, jeff is an identical twin and his brother is exactly the same way (nice work, debby).  it makes me so happy to know that my two nieces are growing up with such an incredible father and what a gift to be able to give your daughters - showing them how men should behave.

i know we're all independent women and can 100% take care of ourselves, but it's nice to have a gentleman around.  tell me, what was the last chivalrous thing a man has done for you?