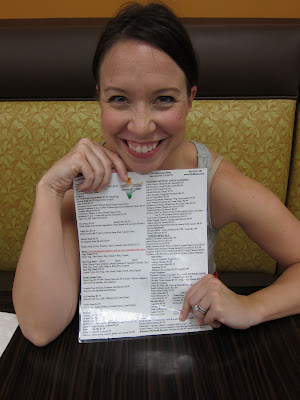 so i wrote this entire post from orlando weeks ago and then somehow it completely disappeared.  that was definitely not a thing i love, but since indian food is one of my favorite cuisines in the world, i decided to give it another try. here we go:

jeff and i are always on the hunt for good indian food, but sadly, los angeles county has yet to impress me.  i found a place years ago in santa monica called nawab of india that i absolutely love, but it's in santa monica, which means it might as well be in chicago.  if you ever are on the west side, i strongly recommend it - they make their own pickle there and it's insane.

back to my point - good indian food in la is hard to come by.  my litmus test for this is always chicken tikka masala. of course i throw in garlic naan, rice and then either aloo gobi or yellow daal, but the tikka is always my barometer.  jeff likes to point out that chicken tikka masala is the white people dish, supporting his theory that every ethnic cuisine has some non-threatening dish for those of us who aren't that adventurous.  i know i should go with the lamb vindaloo or the fish curry, but i just can't help myself.  i love chicken tikka masala.

so you can imagine how thrilled i was to discover that we live blocks away from one of the best indian restaurants - bhanu indian grocery. as stated in the name, it's mainly a grocery store with a small family-owned restaurant attached.  the family started the store while catering on the side, and eventually decided to open the restaurant.  at first when we started going it had a lot of character (meaning plastic cups for drinking and dishes served on generic white plates).  we often just order take out because it's so close, but a couple of weeks ago we decided to dine in.  i was so happy to see that they now serve their deliciousness in lovely copper pots and have real glasses.  the best part about it is that we are now confirmed regulars and nancy (who is awesome) knows us and our order by name.  oh, and for those of you who are adventurous, they also sell ghost peppers there.