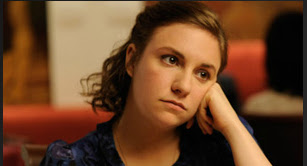 one of my favorite treats every sunday night is watching hbo's new comedy, girls (click on the pic above to watch a clip). it brings me back to my early 20s where i was fresh out of college and had no idea of what life was really about, but of course, i thought i did.   some reviews have said it is like sex & the city for the millennials, minus all the fabulousness, but i think it's more than that.

unlike a lot of cheesy sitcoms, it really seems to grasp all of those awkward moments of your 20s -- the bad dates, the breakups, the breakdowns, the late nights and one night stands you wish had never happened.  but it also captures those great moments where you would stay up analyzing some loser guy with your roommate until 3 am, dance around the apartment with your girlfriends and then go to brunch the next day to talk in detail about exactly what happened last night.  i was sort of a mess in my 20s --  always calling my parents for more money that i had stupidly spent on shopping & nights out, choosing terrible guys to obsess over and just generally not feeling comfortable in my own shoes.

i've read a lot of backlash about how this series is about spoiled white girls -- and my response is ummm... how many of those already exist on tv? just scroll through any network lineup and you'll find them.  to me, this one takes those "fabulous" moments and makes them real (like the flabby stomach scene where her idiot lover grabs onto her chub during sex & acknowledges it! that made me and probably every woman watching wince, as it's like watching your biggest fear played out ). there is nothing glamorous with the sex scenes and i appreciate that. and with the producing team of judd apatow and lena dunham (who also stars in, writes & directs most of the episodes) it goes without saying those are going to be awkwardly delicious.

bottom line: i love the boldness & quirkiness of the series. it's refreshing.   if you haven't already watched it, check out this clip where judd and lena talk about the genesis of the show.