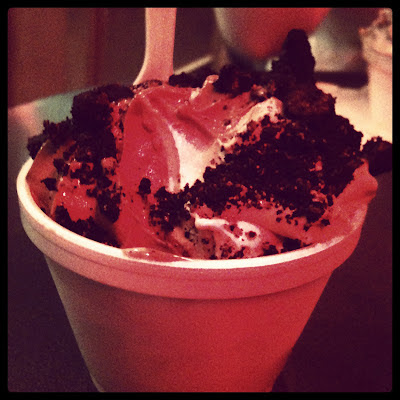 my love for froyo began when i was a little girl in louisiana.  whenever we were visiting my grandparents, i would take a daily afternoon drive with nonny and poppy.  my nonny suffered from alzheimer's and she didn't always know where she was so routine was important.  my grandfather was such a devoted partner to her that he made sure that they had a routine of a daily drive - and that often consisted of a stop for frozen yogurt.  of course, for me it was a no brainer to join them - chocolate, absolutely!  some of my favorite memories with the two of them were driving in their lincoln continental.  i loved climbing into the back seat, giggling with my sister and listening to him sing for the entire ride.  at some point, we'd inevitably stop at this local frozen yogurt shop and i'd always get a turtle sundae.  i didn't really think of it before i started writing this post, but i suppose that's part of why i love it so much.  it makes me think of them.

now that you know my addiction started at such an early age, you understand why i consider myself to be a froyo connoisseur.  i only feel it's fair to let the la peeps know about the best one around:  studio yogurt.  the pinkberry craze created a new interest in frozen yogurt and after that, the self serve froyo shops started popping up all around town.  don't get me wrong, there's definitely a time and place for them, but my heart will always belong to studio yogurt.  why, you ask?

it's what frozen yogurt is all about.  every time i go in, there is always a line of people waiting to taste a sample of their ten different yogurts and the ladies there have a very efficient system for this.  they know to put the toppings on the bottom and then again on the top of the yogurt.  and the yogurt is so creamy, so much better than the stuff they serve at yogurtland.  the list of yogurt is often changing, and they also have a board where you can request flavors.  my favorite is the grasshopper mint, but it isn't always there (reason for the suggestion board) so my usual is just plain chocolate with reese's peanut butter cups on top.

you can sample as much as you like, they only take cash and they are beyond generous, packing copious amounts of froyo that spills out of a 6 oz cup.  their clientele ranges from working actors (i've seen jason bateman there more than once and most recently sally kellerman -- for the bad 80s movies lovers, she was in "back to school"), couples stopping by after dinner, girlfriends bonding,  and the super skinny girls bordering on anorexia who walk out with their dinner of yogurt piled above their heads -- but those girls have a strict no topping policy.

speaking of the toppings, that is one of their biggest selling points.  as my friend leah pointed out, if you get a topping on the side, they pack a rather large cup full of your favorite sweet, then you can just share it with your friend - everybody wins.

even yelp agrees with me: