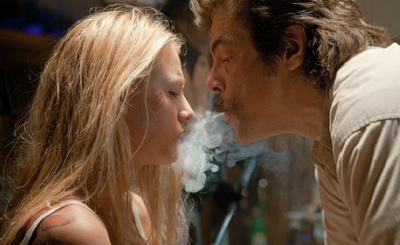 last saturday night we went to a screening of savages with our friends jorge and jenny.  i can't say that i'd recommend the movie, as it spent half of the time showing blake lively making out and the other half with what felt like gratuitous violence.  it was as if the film didn't know what it wanted to be:  one minute they were showing you a video of the drug cartel cutting people's heads off via machete and the next blake lively was narrating the drug story, choosing words like "wargasm" that made it feel more like "sisterhood of the traveling pants" than an oliver stone thriller.  i was also disappointed with salma hayek's character. if you are going to have a female be a drug lord, make her a bad ass.  instead, elena sanchez resembled more of a neurotic mother than a cut throat killer.  the shining star in the movie was of course, benicio del toro.  in one brief moment he could arouse fear by knowing just what was going to happen when he and his "gardeners" arrived at your door, and then the next he would have you laughing while he's offering up genuinely funny lines while chewing on a ham sandwich.  all in all, the general consensus seemed to be that it gets a 6 out of 10.  we saw it for free, but if you are headed to the movies, i'd probably say pass on this one. 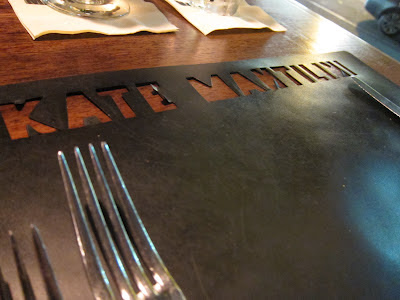 the best part about the evening was that we ended up walking over to kate mantilini for a very late dinner where i had a mac and cheese that put all others to shame.  apparently, that is a classic dish to order at the 25-year old restaurant, which was started by harry and marilyn lewis, the original hamburger hamlet owners.  our waiter said the secret to their award-winning mac & cheese was the addition of tabasco sauce.  it pulls it all together, offering just enough heat for the melted cheddar to saturate the noodles and topping it off with breadcrumbs is simply perfection.  jeff got the chicken pot pie, which was as delicious - buttery, crispy crust with chicken and veggies simmering in a nice bechamel sauce.  jorge got my favorite dish for the name alone "the little hollywood." it was a petite filet served on a crispy garlic bun with battered fries.  jenny went with a pear & stilton salad, but spiced things up with their "those potatoes" which are essentially crispy hash brown goodness layered with warm sour cream and spring onion.  delish!